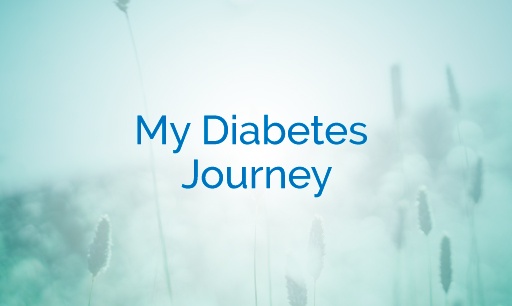 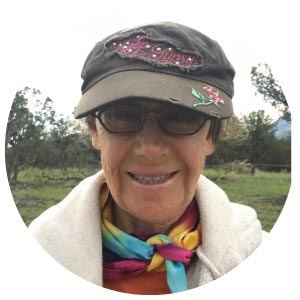 During a visit to an ophthalmologist in 2007, he described my eyes and general health as “ridiculously healthy.” I thought I was the last person on the planet to be susceptible to Type II diabetes. I was slender, active and mainly ate an organic, vegetarian diet backed up with nutritional supplements. And there was no family history that I knew of. In my world, diabetes only happened to sedentary, overweight people who ate a lot of refined, “white” things and fast food.

While I can’t pinpoint the precise day I crossed over from healthy to diabetic, I do know that by 2008 I was deep into diabetes—and denial. My first clues, ignored for nearly a year, were intensive thirst and a sense of tingly numbness in my toes as I was going to sleep. By then, my fasting blood glucose levels were already above 300 and my aiC was over 13. I’d waited too long to have it checked out, and paid the price in both my cardiac health and vision. 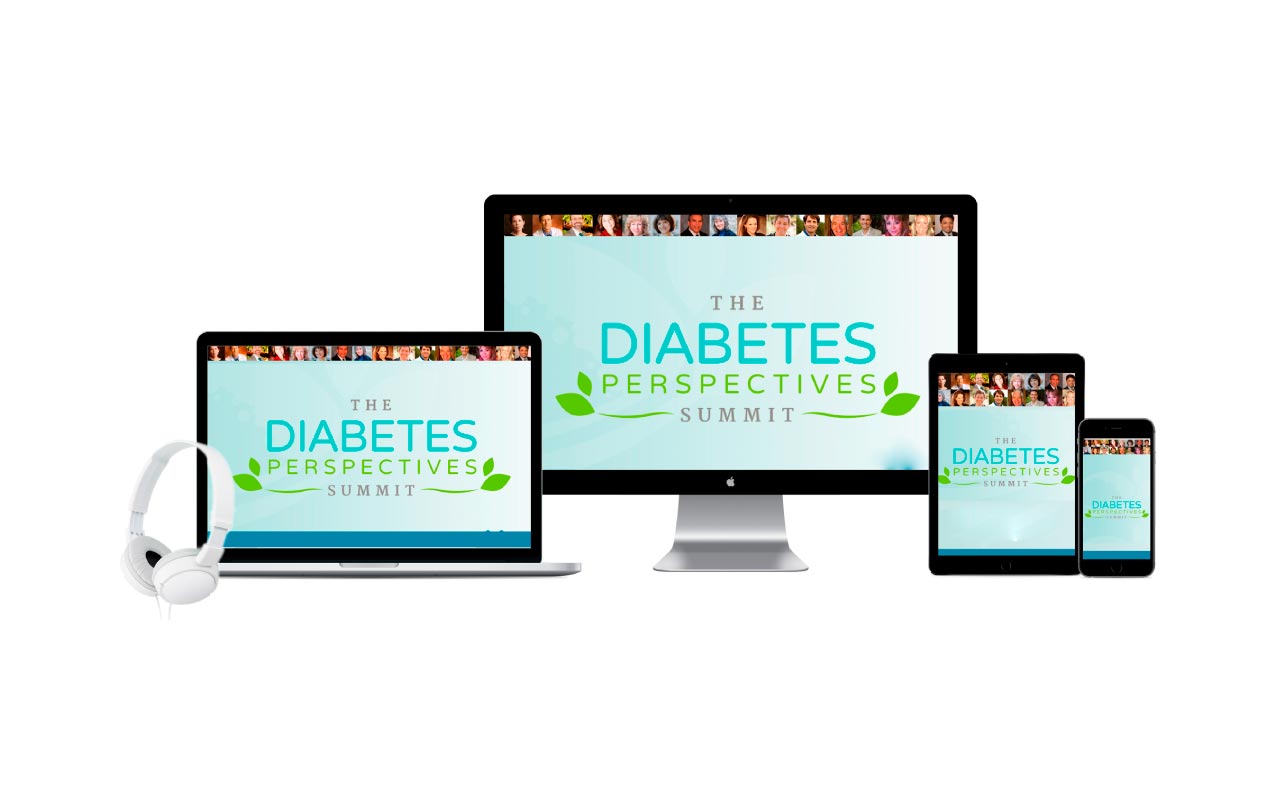 From the Diabetes Perspectives Summits

From the Diabetes Perspectives Summits

Diabetes is a sneaky foe. It permeates each cell in one’s body, literally basting every cell in excess sugar—effectively caramelizing them. The body loses its ability to let glucose into the cells for energy, and the result is insulin resistance. And chronic fatigue. A normal blood sugar response is easily handled by a healthy pancreas, but as diabetes takes over, the beta cells of this critical organ lose their capacity to process the sugars circulating through the bloodstream.

Soon after my diagnosis, I was given the standard prescription for Metformin. I’ve never been much into meds, and sought more natural solutions through diet and supplements. I immediately gave up all bread, rice, potatoes, most fruits and cut back on dairy. I saw improvements, but I wasn’t there yet.

The medical establishment says there is no cure for diabetes, but I didn’t buy into this belief. I kept searching. In 2009, soon after my naturopathic physician threatened me with insulin, I discovered the Tree of Life Center in Arizona (near where I lived at the time) and there was introduced to a new way of life.

Out of this experience, and recognizing the need for simplicity of meal preparation, my husband Kenny and I created Sassy Salad Secrets, a way to achieve and sustain success on a largely raw, plant-based low-glycemic diet that was also insanely delicious.

While I’d made great strides in improving my health and reining in complications, I was still vulnerable to temptation, especially while traveling and socializing. I was enjoying a little bit of half-and-half in morning coffee. Home-raised, free-range eggs were okay, weren’t they?  A little bit of organic cheese now and then couldn’t hurt, could it? Okay, a lot of cheese sometimes. And then there was that memorable dinner last summer with our new New Mexico neighbors with wild-caught salmon and corn on the cob (we brought a huge salad!).

Without the discipline of an ongoing support network outside of annual consults with the Tree of Life, my aiC bounced around from a low of 5.1 to a high of 7.5. My most recent aiC in late 2017 had been 6.5—creeping back into the dreaded zone of full-on diabetes. Six months at our new property in New Mexico and a long way from a reliable source of organic food was taking its toll. Something had to change or I’d be on a fast track to further vision loss and other complications.

A piece of irony: Our new ranch is in Pie Town, world-famous mecca for homemade pies. A friend came to visit from Arizona and thought she would bring us the ultimate treat: an apple pie with chili peppers! While my husband had no issues enjoying this gift, this was definitely something forbidden for a diabetic. I had until this day resisted the temptation to go anywhere near a slice of pie from Pie Town. But here it was. I had a bite, and then another….. It tasted good, but I paid the price.

And we ate cheese on rye crackers. And about once a week, a veggie omelette.

My numbers were going in the wrong direction. We came back to Texas in October and it became easier to stick with the plan, given the abundance of fresh organic product in the area. I had bloodwork done and was devastated to learn my AIC had climbed way, way up to 6.5.

Then came a breakthrough. Earlier this year, I signed up for the iThrive docuseries “Rising From the Depths of Obesity and Diabetes,” created by Jon McMahon, at the time a self-described morbidly obese type 2 diabetic (and now a svelte mountain climber who has lost 88 pounds so far). The series was inspiring. During the week it aired, my fasting blood sugars fell below 100 for the first time in months. I learned about being in a community of like-minded people and the value of support and guidance.

Out of the docuseries came the opportunity to sign up for the E4 Diabetes Solutions ALIVE Simple Steps  90 day program. I thought about it long and hard, but with my 70th birthday coming up, I knew it was now or never. I wanted to stick around for my husband and animals for a long time and enjoy our new ranch in the mountains. But I knew I couldn’t do it alone—I needed more customized support. The program featured a team of medical and nutritional experts, comprehensive before and after lab testing, weekly webinars, small groups and one-on-one coaching. And accountability.

I decided to jump in. 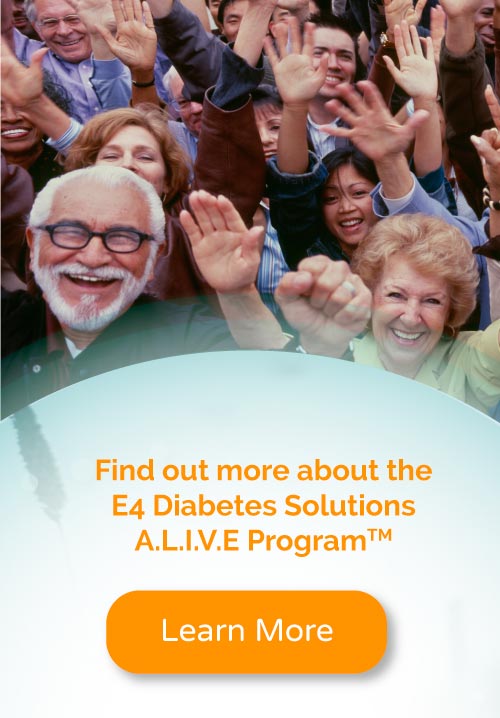 E4 DIABETES SOLUTIONS | Terms of Service | Privacy Policy | Medical Disclaimer |
There is no guarantee of specific results unless specified in a signed contract. Results can vary. All material provided on the E4 websites is provided for informational or educational purposes only. Copyright 2019, All Rights Reserved 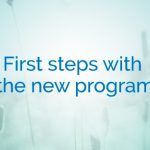